If you ever thought that seasteading was a wonderful, obvious, surprising or even absurd idea (and I am not sure whether living on an old gunnery plarform is really the future) then this takes the idea one step further. We all know that the plastic rubbish in the world is a problem, and that a lot of it ends up in the ocean, drawn irresistably into the various gyres that cover the plaet’s watery surface. One freind and colleague was amazed to find out that these collections of plastic rubbish were not mountains of garbage to be climbed upon. Instead they are a soup of various sized, but mostly tiny and even microscopic fragments, of various types of plastic. 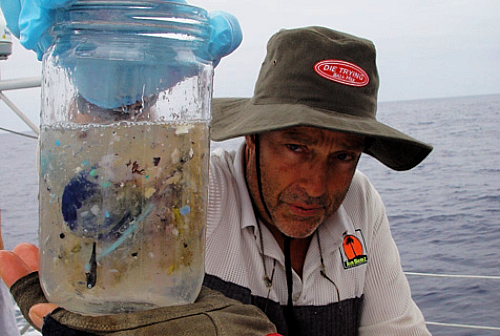 There’s not much you could do with them. Although quite possibly, microorganisms are currently evolving to feed on these plastics. If or when that happens, there will be trouble, as they then arrive on land to consume all our wonderful plastics. An interesting doomsday scenario, a world without plastic. Hmm.

So the idea of fishing for plastic is strange. Captian Moore, for instance, uses filter nets, usually used for collecting plankton, for collecting plastics in the North Pacific Gyre. There is more plastic than plankton now. Rather than collecting it at sea, there are ongoing attempts to catch the plastic before it leaves inland waters. Thus the call for the “Traditional Amsterdam Plastic Fishing” day last September.

But the frivoulous, surprising and  design researchers of the Netherlands have once again trumped us all with strange ideas. Not satisfied with Plastic Whale’s project of building an actual functional boat from plastic rubbish fished from the canals of Amsterdam, Whim Architects in Rotterdam have decided to do the same in the open ocean. By somehow binding this mass of microscpic bits of plastic together, they plan to build a giant island, subsisting upon seaweed farming and fishing. A Recycled Island. Literally.

1 thought on “Recycled Everything”

The Time’s Up Boating Association (TUBA) is a loose affiliation of boating practitioners based around the group Time’s Up in Linz, Austria.

Control of the Commons

By making a series of trips along several watercourses in Europe and Australia in boats constructed of scrap, the Control of the Commons (CoC) project undertook an artistic exploration of the relationship of people to each other, to water and the way that effects the use of watercourses.