Last week I was in Porto, or more correctly, Oporto, the northern city of Portugal. Famous for all sorts of things, like being rarely invaded (they eat cuttles there to celebrate that) and accidentally inventing Port wine (someone put the brandy in too early to preserve the wine and it tasted fantastic), we were there for an incredibly interesting festival called xCoAx and a Future Fabulators scenario planning and prehearsal event. After these things, before getting on with other things, we had a day off. What does one do on a day off? Look for the nearest harbour, of course!

On the metro out to the industrial and Leixoes fishing harbour at Matosinhos, I nodded off, woke, watched the buildings get stranger, spotted the ocean in the distance and then got out two stations before the end, to have a look at the fishing harbour. I had a quick coffee and some meaty pastry to get my bearings back, then headed down the main street towards the harbour.

I paused in front of a small shop, its windows filled with photographs of fishing boats, transporters, fisherpeople and the local harbour. The door was locked, so I presumed that Saturday was not an opening day and was about to head on when the window opened and a head popped out, chatting on a phone. After he hung up, I asked him whether he was open and within seconds, he had opened the door.

Stacks of prints. Labelled envelopes of middle format negatives. A century of history: Antonio, his father and grandfather have been documenting the fishing boats and life around the area for the past century. Antonio has been photographing for over 50 years himself. An amazing collection.

I had been amazed to see the photos outside of filled fishing ships coming in (when Antonio says “fishing ships” I kept understanding “fish and chips”) and was particularly charmed by one photo with the crew up the short mast, waving at the photographer, their ship filled to the gunwhales with sardines. The feeling of joy was beautifully captured. One of Antonio’s grandfather’s photos also caught my eye, showing four women working in the water with some old sailing fishing  boats in the old harbour in the background. Purchasing these, Antonio gave me a lovely image of some old fisherpeople on the beach, working with fish and nets. 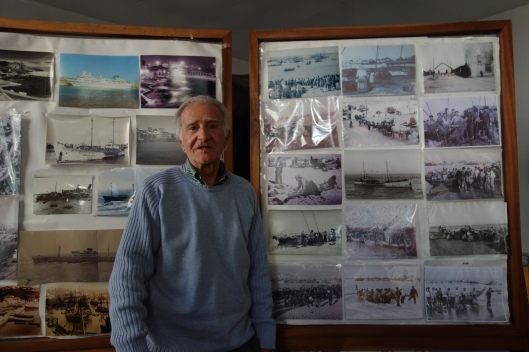 Antonio with a small selection of his photos

So if you are ever in Porto, get a metro out to Leixoes, the Matosinhos, and visit Foto Mar, Rua Brito Capelo 390. Metro stop Brito Capelo on the Sr. do Matosinhos line. Hurry up. Antonio is well over seventy and his children will not be taking over the business. On the other hand, he was showing no signs of faltering, so we can hope for more.

Afterwards, make sure you visit the fishing harbour, eat some fresh sardines, visit the three yacht clubs all in the same compound on the north side of the river (on a previous visit, I met the skipper from Noah here) and walk on the huge sandy beach. Did I mention that I like Porto?

The Time’s Up Boating Association (TUBA) is a loose affiliation of boating practitioners based around the group Time’s Up in Linz, Austria.

Control of the Commons

By making a series of trips along several watercourses in Europe and Australia in boats constructed of scrap, the Control of the Commons (CoC) project undertook an artistic exploration of the relationship of people to each other, to water and the way that effects the use of watercourses.